For women and for our union, not one step back 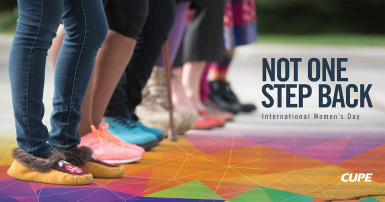 Across the country, CUPE members are participating in community events celebrating women’s activism and reaffirming our commitment to gender justice. And this year, CUPE members and women around the world have a very clear message: Not one step back.

Recent events in Canada, in the U.S. and around the world demand that we remain vigilant and continue to resist all forms of oppression. We are witnessing an increase in hate crimes, and we know that women marginalized by racism, colonialism, ableism and homo/transphobia are disproportionately affected.

The Trudeau Liberal government presents itself as feminist, but it drags its heels on the actual issues that women care about, including pay equity, the inquiry into missing and murdered Indigenous women and others. The Trudeau government’s actions on health care and child care fall far short of what’s needed. And while the expansion of the Canada Pension Plan is a big win, the omission of caregiver and disability “dropouts”from the calculation is a form of pay discrimination that mostly hurts women.

Take action: Not one step back

CUPE has joined a campaign by the Feminist Alliance for International Action (FAFIA) and over 100 other organizations calling on the federal government to Step Up for Women’s Equality. CUPE encourages members to write their MP, tell friends about the campaign and join on social media, using #StepUp4WomenCA.

CUPE’s new poster for IWD features the militancy and leadership of marginalized women. The poster shows women from different communities united and advancing together in the fight for gender justice and declares, “not one step back.”

Check out these additional resources:

On International Women’s Day, we declare “not one step back.” And we commit to regaining ground on justice for all women.

This was the spirit on January 21 when over four million people marched for women’s rights in the U.S., with hundreds of thousands more marching around the world.

We vow to keep marching. Not one step back.