Our Mantra is “Never Give Up” 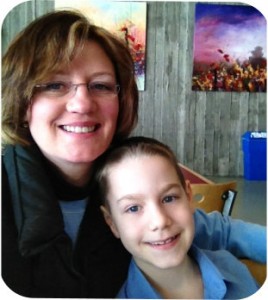 My grandchild is on the Spectrum…….so now what?

My grandson, Kyle, is 8 years old. He is the center of my universe and the apple of my eye, everything I do revolves around him and his world. Kyle was diagnosed with an ASD in 2010 when he was 6 years old.

I have been raising Kyle since he was 8 months old. He hit all of his developmental milestones with a few minor exceptions, when he was 4 we noticed that he was regressing and could no longer say his ABC’s or count to 10 or spell his name. He was suspended from junior kindergarten 4 times in three months and no one seemed to know what was going on.

My husband and I were called to the school for a meeting where we were told that he should have a psychological assessment done, but the wait list with the school board was long and he wouldn’t been seen until he was in grade three. He was in grade one at the time.

We decided to seek out a neuro – psychologist and have it done privately. When we finally got the diagnosis I was shocked, saddened and relieved all at once. I knew very little about Autism and Autism Spectrum Disorders other than what I had learned in the early 90’s in University, so to say the least, I was at a loss. To say that my life changed in a fundamental and dramatic way is an understatement. Finding the supports that we needed was a challenge because we didn’t know what we needed.

Everyone that I spoke to directed me to Autism Ontario and that is where I gained the most knowledge and understanding.

How have our lives changed?

When I first laid eyes on Kyle, he took my breath away and I knew that we would have a very special bond. I dreamed of spending time with him, teaching him about nature, going on trips and attending his games when he joined organized sports. I started an education fund so he could attend a post-secondary school. I assumed he would have lots of friends and grow up to be a successful adult. We still have the same hopes for Kyle, but we know that it will take a bit longer to achieve some of our goals. The swear jar in our home consists of words like “I can’t, I don’t know how and impossible”. Our mantra is “Never give up”.

My husband and I have become Kyle’s biggest advocates, and in turn, an advocate for all families who have a loved one affected by this increasingly predominant neurological disorder.

I have found patience that I did not know I had, having to explain to people that Kyle is not being rude when he doesn’t speak to them or look at them when he does speak, or that he isn’t deliberately ignoring them or trying to irritate them, he just doesn’t get the social cues.

I have become very aware of our political environment and where the need to focus is, if I want to ensure that Kyle has a promise of a future where he can continue to experience success, acceptance and the support of his community.

Having a grandchild with an ASD can be very challenging, and yet still very rewarding.

I proudly tell everyone about my grandson and all of his accomplishments, the only thing that has changed is the ruler by which I measure his successes. I want everyone to know that my grandson is a talented, funny, good natured and caring young man.

Simple things that many families take for granted are monumental moments for us. Catching a ball, riding his bike without training wheels, reading a word unassisted… These are some of the milestones that were cause for major celebrations in our home because they didn’t come easy.

Being a grandparent of a child who has an ASD has taught me to be aware of others perspectives, conscientious of perceptions and misperceptions, the importance of good communication and understanding, awareness and acceptance and most of all, that it doesn’t matter what my grandchild’s abilities are or are not, I love him with all of my heart and together we will accomplish whatever goals we set for ourselves, it might take us a little bit longer and we may have to deviate from the rest of the group to get there, but we will get there! We never give up!

Note: The original story was posted on the Autism Ontario website.